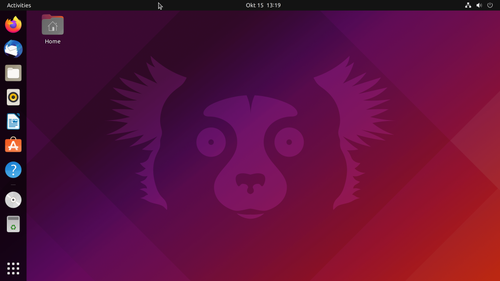 Ubuntu ( (listen) uu-BUUN-too) (Stylized as ubuntu) is a Linux distribution based on Debian and composed mostly of free and open-source software. Ubuntu is officially released in three editions: Desktop, Server, and Core for Internet of things devices and robots. All the editions can run on the computer alone, or in a virtual machine. Ubuntu is a popular operating system for cloud computing, with support for OpenStack. Ubuntu's default desktop has been GNOME, since version 17.10.Ubuntu is released every six months, with long-term support (LTS) releases every two years. As of 22 April 2021, the most recent long-term support release is 20.04 ("Focal Fossa"), which is supported until 2025 under public support and until 2030 as a paid option for companies and free for individuals who register. The latest standard release is 21.10 ("Impish Indri"), which is supported for nine months. Ubuntu is developed by Canonical, and a community of other developers, under a meritocratic governance model. Canonical provides security updates and support for each Ubuntu release, starting from the release date and until the release reaches its designated end-of-life (EOL) date. Canonical generates revenue through the sale of premium services related to Ubuntu and donations from those who download the Ubuntu software.Ubuntu is named after the Nguni philosophy of ubuntu, which Canonical indicates means "humanity to others" with a connotation of "I am what I am because of who we all are".